In 1934, Surf pioneer, waterman & innovator Tom Blake was inspired by a boat’s keel and proceded to put the first “fin” onto one of his surfboards in order to help control the board’s motion. From that day forward the evolution of the “surf fin” began.

Bob Simmons elevated the surfboard fin’s design, first working on single fins, and then experimenting with “duel fin” surfboards. These “Simmons” shapes had two fins made of wood which resembled “half moons.”

“Modern Keels” emerged as an result of Steve Lis’ experimentation. As an avid kneeboarder, Lis came up with his progressive “fish” templates and united his boards with twin keels resembling those of Simmons’ designs, but was more specifically influenced by Bear Mirandon. These new keels were outfitted with updated shapes and foils.

The new “keel” fins and fish shapes inspired an array of professional surfers such as Jeff Ching, David Nuuhiwa, and Reno Aberilla.This new trend also influenced renowned shapers such as Skip Frye and Terry Martin who advanced the movement and created boards known for their speed and fluidity.

True Ames is providing the surfing world and especially craftsmen with top notch –  perfectly foiled marine plywood fins which have proven to transcend time and provide surfers with that iconic and effortless feel. Our fins have positive buoyancy as well as that classic aesthetically pleasing look, which is sure to meet your standards. 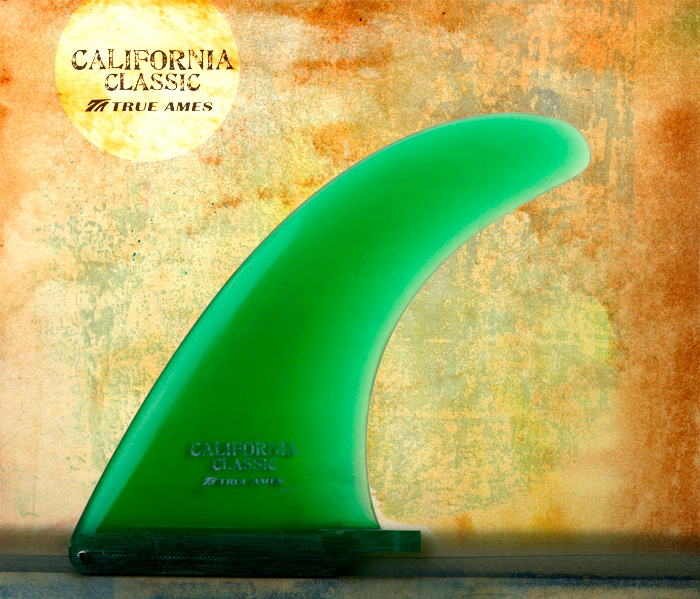 Nine sizes make up this collection for a wide range of choices. The medium build and rake make this design the foundation to begin to expand your quiver. All boards and designs accepted. A great all-around fin.

These Volan fins are fine tuned with a precision foil as well as proper flex. All fins are hand made in our factory and go through the strictest quality control. Fins made with Volan fiberglass and properly aligned for optimal weave orientation, have very high performance flex characteristics. The flex comes more in the body of the fin rather than just at the tip.

For more than three decades Chuck Ames and the True Ames Fins team have been at the forefront of the fiberglass fin industry. Balancing a surfer-driven design ethic with an unyielding commitment to innovation and production excellence, we have forged an international reputation in the surfing and windsurfing communities as the guys who, simply put, make your waveriding vehicle of choice work even better. After all, as Chuck likes to say, “You could have the best board in the world shaped for you but, if the fins are off, it won’t go- the thing just won’t work the way it should.” Day in and day out, it is our goal at True Ames to make sure such fin failures never happen to you.

This is a classic film clip from “All I’ve Found” Highlighting George Greenough’s Knee boarding on single fin spoons.The waves in this clip are pristine. Very cool footage!  Check out our selection of Greenough Fins at trueames.com Our most popular Greenough fin is the 4-A: The full base coupled with the tapering, moderately flexible tip creates a balance that transcends and complements so many aspects of surfing. Of course a unique understanding of his aquatic fish friends is the foundation here. Install the 4-A on any performance surf vehicle and you will find instant bliss. Currently available with matte finish. SMALLER SIZES ( 7” – 9” ) Use the smaller sizes for a single fin or 2+1.